Women's March on Washington: A shout heard around the world

In my previous post, I wrote up some observations on the Women's March on Washington (WMW) and how the technology that allows us to produce and share multimedia adds dimensions to what what we actually do when marching and by marching. I stated that what remains with me most clearly from a week later is people's voices: people speaking and listening to each other in ways they hadn't before.

In that post, I looked at people's voices from the point of view of the information that they convey. However, because of my interest in speech and speech technology, I also see people's voices purely and simply as an audio signal. This post contains some observations following on from the fact that each person's voice is actually a sound wave.

Newly arrived at the WMW, we stood in the midst of a sea of people, wondering if we were actually going to see the stage. As we oriented ourselves, an enormous sound moved towards us over the crowd. It started from a way off, and moved closer and closer like a wave from far out in the ocean. It was an unfamiliar sound.

As the wave passed over us, it became clear that shouting was creating the wave. When it reached us, we also shouted, and it moved on.

My backstory: My main reason for marching at WMW was for health care, or at least that's where I started. I found myself quickly leaning towards the position of the person holding the sign saying, "Too many issues to fit on one sign". I don't join mono-gender initiatives: gender issues affect everyone and we only get to equality if we get to equality together. We must move on equal footing towards equal footing. The WMW was not mono-gender. About 10-20% of the crowd were men, but my estimate might be wrong, since putting the people around me into gender categories was one of the last things on my mind that day.

After the shout wave had passed, it struck me: What I have just experienced was an acoustic event that has never before occurred on the surface of the planet. The shout wave was the sound of a woman-dominated group of hundreds of thousands of voices acting in coordination. No wonder that it had struck me as an unfamiliar sound.

I can think of times in the history of the world in which a group of men would have created a shout wave, or even a 50/50 gender group. I can imagine what that would sound like, or perhaps I have even heard it before. However, this woman-dominated sound was fully new. We have collaboratively invented, as a species, the ability to generate a never-before-heard acoustic event. There was not one wave that day, but many.

Later, I saw this acoustic event that I call a "women's shout wave" referred to in the newspaper as a "rolling roar".

If you know something about sound, you know that it has a physical reality. Sound is a mechanical wave caused by compression of the air: it can knock you off of your feet. The size of those waves is directly and necessarily related to the size of what initially starts pushing the air to create the waves. The smaller the physical source, the faster the waves and the higher the sound. Our voices are created by vibrations in our larynx (voice box). On average, women have a smaller voice box than men. A woman-dominated crowd will produce a higher pitched sound than a gender-balanced crowd or a man-dominated crowd. Throw in a few kids' voices (also small voice boxes) as with the WMW, and the resulting rolling roar is a powerful, yet sparkling, acoustic event that deserves to be compared to the sound of a band of angels, however you might choose to imagine that.

In moments of philosophy, we often discuss the question of a tree falling in a forest: if no one hears it then did it really make a sound? The wave of women's voices at the WMW produced an acoustic event of a fully different nature. If you think about it, you cannot even ask this question about the women's shout wave. It is produced if and only if a crowd dominated by women comes together in one place and acts in coordination: The existence of this sound and the fact that it is also heard are one and the same.

The wave of women's voices at the WMW truly produced a shout heard around the world. Reflecting a bit you realize that this new sound is not the only new signal that was produced at the march: shout waves happened at the march, but were not the essence of the march. The essence was a new social signal. What this signal is will reveal itself in what we do next: it may not be a mechanical wave, but I have no doubt in its power to move things in our social/political/physical world.

The discovery of the women's shout wave may or may not excite you as much as it excites me. But you don't have to share my enthusiasm of having participated in the acoustic history of humanity in order to agree: as long as we are able to come together and make this coordinated sound, we are headed in the right direction as a species.

Tamika Mallory said at the WMW, "When you go home remember how you felt": https://youtu.be/dDc9Ochrifw?t=3h38m36s Remembering the unique sound of the rolling roar has the ability to place us back again in the moment, in recalling what we have heard, we can recall what we felt.

But the rolling roar also reminds us of something very important about the movement: the decision to create the women's shout wave is the decision of every individual in the crowd at the moment the wave breaks over her. Every single time when it is time for you to contribute to the wave, you must check your alignment with the overall goals, and then you must shout your lungs out. You have a responsibility as an organizer to target a straight, true line, but also as a participant, an "organizee" as it were. Each person individually is responsible to periodically check that we still are on track towards the right goals, and after every check to reengage with full force.

That take a lot of energy, and a lot of strength. In the moments, when I wonder where will that strength come from, I think of this sign: "Do not be afraid". 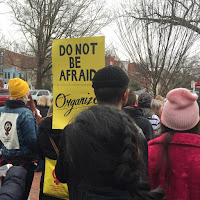