Gender in Advertising Images: The Devil is in the Detail 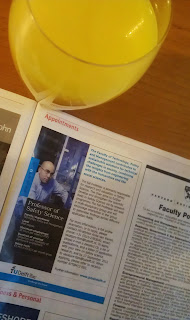 My Saturday was unbalanced already at breakfast, while reading the Economist and drinking my orange juice. On page 67 of the August 25-31, 2012 issue, I discovered that TU Delft is recruiting a Professor of Safety Science (good news!). Unfortunately, whoever designed this ad has made some unconventional decisions (not such good news).

The most obvious "bug" is the choice to include in the advertisement an image of a person. Since this misstep is a useful illustration of the limitations of visual depictions in multimedia, I decided to dedicate a blogpost to discussing it.

At first consideration, it seems obvious that our university should advertise using image of people. One of the reasons that I love working at TU Delft is the emphasis on solving societal problems. Using pictures containing people and not just technology wherever possible seems to be a good strategy for getting the importance of our work to address human and social challenges across.

However, a major limitation for visual depictions such as images and videos is "the curse of instance  depiction". Basically, it is impossible to create such visual imagery without committing yourself to depicting a full range of details. You can't get across and abstract concept, for example, "car" without actually committing yourself to an instance of a single car existing in the real world, which you take to stand for all cars. Instead, you are going to need to show in your image a specific type, make and model.

Here, the concept that the ad is trying to convey is "professor". The "type, make and model" chosen to convey this concept are an adult of a certain gender and a certain age group, wearing glasses. It seems plausible that the person designing the ad was aware of the problem of instance depiction. The decision to use a model with a shaved head makes it possible to avoid depicting the hair color, which could serve to further specify the ethnic background or the age.

However, it is extremely difficult, if not impossible, to "hedge" on the gender question in images of the real world. A person depicted in a daytime work setting will generally be identifiable as a male person or a female person.

If we assume that the process by which we choose and interpret images that are being used to represent categories follows prototype theory, then the choice of a male to represent a TU Delft professor is no just unbalancing for the reader of the advertisement, but is very serious indeed. Prototype theory tells us that in our cognitive representations, some members of conceptual categories are more salient than others. We think of them first when we think of a category and we react to them more quickly when confirming category membership.

The use of a male person in this advertisement sends the message that males are the canonical professors at the TU Delft. Although men are clearly in the majority in the faculty, there is not any sort of a conscious intention at the university to keep the situation that way. In fact, I have the impression that everyone is working to shift their idea of how can be a professor to encompass a diverse demographic more directly representative of the general population.

Visual depictions in multimedia, i.e., images depicting the real world, are limited in what they can express because they deprive us of the possibilities of leaving certain details unpecified. What we have is a reversal of the saying "A picture is worth a thousand words." Instead, the spoken or the written word is able to express more in this case because human language can directly convey concepts without having to make use of specific instances to do so. In effect, the possibility for ambiguity or underspecification is makes human language more expressive that multimedia.

And so, the saying "The devil is in the detail" takes on a new shade of meaning.

What to do about the advertisement? I advise having a closer look at some advertising guidelines. Advertising Standards Canada, a non-profit self-regulation body for advertising, has a helpful list of guidelines for balancing gender representations in advertising online and surely Europe has a similar set of guidelines.

An "quick and dirty" solution is to look to see how other universities advertise. In the Economist, a general tendency to avoid imagery is readily apparent. For example, next to the TU Delft advertisement is a classical advertisement for Harvard faculty positions, whose only graphic content in the Harvard Business School logo.

I was cheered up again when my Google Googles app confirmed for me that the logo used was from the business school (i.e., distinct from the main Harvard Logo). It is my first use of Google Goggles for something other than just playing around with while hanging out with my multimedia information retrieval colleagues.

For completeness, I note a less obvious bug. The advertisement contains the text "Maximum employment: 38 hours per week (1 FTE)" In order to interpret this text, you need to know that "FTE" stands for "full time equivalent". 1 FTE means this position is a full time job. Contrary to what the text implies, no one the Safety Science processor to working 38 hours a week.
Posted by marlar at 12:00 PM

Quite a few people have heard me say that social networks should come with a warning: when you sign up, for example for Facebook, the company should be required to notify you of the danger of long term impact of social  sharing on your personal privacy (and sometimes I also add two other factors: how many hours you are projected to spend "Facebooking" over the coming years and also how much peer pressure and social isolation you will endure if you want to leave the platform). In my lifetime, awareness has developed and legislation has changed such that cigarettes and cigarette advertisements are required to bear warnings about the health hazards: maybe I'll yet live to see awareness rise about the consequences of social sharing.

In contrast to smoking, social sharing done right actually helps rather than hurts. In fact, the rise of online social networking and social multimedia sharing has been downright amazing technological development. Moved by this awe, last year in a project proposal, I effused that social networks are, "...a virtual prosthetic that extends the strong fabric of social connectivity critical to the well-being and growth of human societies into the online realm."

That proposal developed the idea of "worry-free social sharing": a social sharing client that would gently alert us when our sharing actions, in ways we do not intend, threaten to compromise our privacy---and then suggest alternative actions, which allow us to share our personal experiences, but in a wiser way.

Yes, people are responsible for their own actions. But in some cases, we as individual users do not have the understanding of multimedia analysis technology, or of the power of algorithms to combine different sorts of data to reveal facts about us that we thought were hidden. We all would need such understanding in order to allow us to make informed decisions about which types of social sharing is harmless and which types should better be avoided.

Even for the most savvy of us there are always surprises: Did you know that if you upload a video to YouTube and you carefully avoid geo-tagging it, but if you happen to be in a city and capture an ambulance siren in the background, that siren will serve to indicate in which city you are? Check out the work on multimodal location estimation [1]. Maybe you don't care if the world knows where you are, but if you do happen to be worried about having left your house empty during your vacation, it would be good to know that you just about betrayed your location to the world without realizing it.  I've written about this before, e.g., in this post that mentions cybercasing.

It is within the reach of technology to build a "worry-free social sharing" client. The problem is getting the research funding to do so. Industry doesn't really have an interest in having users start being concerned about the implications of their sharing behavior. (It's in their interest to just send the message "share more".) Sure, it's unpleasant and possibly off-putting to have to reflect on the fact that someone might break into your house based on information about your location gleaned from videos that you post to YouTube. But is seems to me that "worry-free sharing" is an idea that users could identify with: just like the cereal box in the morning that announces how much fiber and how many vitamins we are consuming promotes consumption rather than driving people away from a product.

Another project proposal won the competition over the "worry-free social sharing" idea. One of the professors involved in the review later informed me that "worry-free social sharing" sounded like something female. I wasn't really sure what to do with that remark beyond thinking that it probably wasn't one of the considerations for the decision and storing it away for future reference.

I hadn't thought about the femaleness of privacy protection until this weekend, during the new Batman Movie. Here, we watched Cat Woman chasing something called "Clean Slate". She knows that what she needs in order to live her life the way she wants it is to make a clean break with the past. But Batman eventually recognizes this too. And I am happy to see other voices online interested in the privacy themes of the Batman movie. So I am not going to assume that there is only one half of the world population that would be interested in "worry free" sharing solutions.

Thinking about Batman also brought me back to the parallel with the cigarette warning label case. The label pictured above warns of the dangers of second hand smoke, "You're not the only one smoking this cigarette." If warning people about the dangers for their near and dear ones motivates people to cut back or stop smoking, maybe the same effect is true of social sharing. The "worry-free social sharing" client can remind us: Hey, you don't mind posting this picture, but maybe it will have unintended consequences for your friend, who is also pictured.

If you don't believe me, believe Batman: "You wear the mask to protect those you love."