Women's March on Washington: Across time and dimensions in space 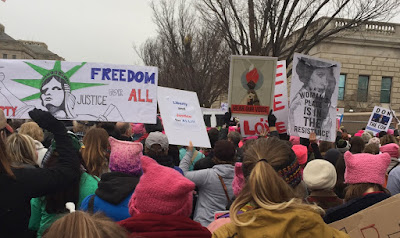 It's been one week since the Women's March on Washington (WMW). I was curious to see what would still grip me most strongly now after one week. Filtering through so many topics, so many impressions, so much emotion, what remains with me most clearly is: people's voices.

People are speaking up, speaking out, and, for the first time that I can remember, speaking with unanimous confidence that speaking can and does indeed bring about change. The most obvious case is the power of every citizen to call their government representatives in order to communicate their opinion. But speaking also has the power to open people's minds to fundamentally different perspectives: speaking with each other can lead to the understanding that the world is a single, immense interconnected system. There is and can be no difference between standing up for ourselves and standing up for other people. This understanding builds confidence, lends authority to our individual voices, and allows us to comprehend our own potential at our cores: what we can make happen by all pulling in a common direction is more that we have previously dared to hope or imagine.

This blog post contains observations about the WMW seen through the lens of information, which is my field of research. Specifically, I focus on information as it is captured and shared in multimedia: audio, video, and images.

In Ch. 2 of their Multimedia Computing book, Friedland and Jain discuss communication-related inventions over the course of civilization. Their discussion makes the point is that the era we live in is an era of media recordings, digital media, and the Internet. These inventions provide us with three invariances, which offer historically unique opportunities for communication: invariance of time, invariance of space, and invariance of addressee.

How do these invariances make marching in today's times different than ever before? When our grandparents' generation made signs and took to the street, their message would only reach the people who were present on that street and in that moment. Anything beyond that was dependent on newspaper and radio coverage.

In 2017, the WMW took place in full realization that the march was not limited to that moment, to that space, or to the specific people who were physically in Washington DC. Most of the intended addressees of the march were somewhere completely different. In the case of all three invariances, I observed behavior that reflected the consciousness of people of these information invariances and the need to use them.

Invariance of time: Signs as photo opportunities
Cameras, both conventional and on mobile phones, were everywhere at the WMW. I watched amazed as people took pictures of each holding their signs. Slowly, at the march, it dawned on me that my idea of not bringing a camera to a demonstration outdated. It became apparent to me that people made their signs with the intention of having other people take pictures of them. Some people who had particularly interesting or novel signs were standing at the side of the street. Apparently their purpose standing there was so that people would come up and chat and then pose with the sign for pictures.

A consciousness pervaded the march: a sign is not merely a physical object, but rather a message broadcasted outward without a predetermined limit. Your face on a picture next to a sign anchors it to you as a person in a way that comments on the Web fail to be anchored. The march came together around unity principles. Motivated by these principles, a "selfie" taken with a march sign becomes an "unselfie": an act of selflessness in support of rights and of people without the opportunity to stand up for their own rights.

Invariance of space: Everywhere at once
There was a feeling of connection at the WMW to people who would have liked to have been there, but who weren't able to make the trip to Washington DC. I saw at least one marcher who had listed the names of the people who supported her on her sign. While marching, I felt strongly connected to the people in our circle of family and friends who had stayed at home and watched the media coverage and/or attended other marches.

During the WMW, the mobile phone network clearly suffered overload. Through much of the duration of the march, it was not possible to access the Web via the mobile phone network, to call, or even to send or receive a text. For this reason, we realized that it was that the people who were not at the march were actually understanding what was going on more than the marchers could, although we were actually at the march. The feeling that being the the middle of the march was not necessarily the best way of getting an overall understanding of what was going on enhanced the impression that the march was not happening in a particular physical space, but in fact everywhere at once.

It was only later that evening that I came to fully understand that there had been marches of magnitude in so many places around the the US and the world. Today, it's a week later and I spent some time browsing march pictures on Flickr. March pictures are all simply march pictures, and whether they were taken at the WMW or at a sister march has since faded into the background.

Invariance of addressee: No one missed out on anything
My experience of the march was people, people, and more people. I know Washington DC well, but at times, I felt completely out of sight of anything familiar. During the time that the speakers were speaking we saw no stage: we just had faith that some where in the core of the masses the speakers were speaking on schedule. At one point, someone close to me in crowd said, "Madonna's here!" People seemed excited to hear that, but everyone had realized by then, that it was counterproductive to try to get to the stage.

There was a consciousness that no one was missing out on anything. Not being able to see any of the speakers was not a disappointment, we could all just shrug "Oh, well, I'll catch the speeches on YouTube later". (I spend some time doing that today.) Thinking about what it was like in the middle of the march: I've never experienced a moment, with such a clear sense of shared awareness that that moment would be lived and relived afterwards. For those with similar scifi habits, I'll say, it's the closest I've ever come to experience the feeling of travel across time and relative dimensions in space TARDIS.

Past, present, and future
The weeks leading down to the WMW were already filled with an appreciation of what past marchers had to teach us, and my thoughts frequently turned to the 1963 March on Washington for Jobs and Freedom. Awareness of the contributions of those in whose footsteps we follow is perhaps the most dramatic impact of information communicated across time (54 years ago), space (around the world), and audience (I was not even born then).

I never thought too much about 1963 as a child, but I also never thought too much about fire drills. When the alarm goes off, you calmly and peacefully leave the school. When things become unbearable, you calmly and peacefully go to march in Washington. These are the procedures and the practices that keep us—all of us—safe and keep our efforts to build a just society moving forward. Images, audio recordings, and videos hold the practice before our mind's eye: yes, it does happen, it has happened, and since it needs to happen, it will happen again.
Posted by marlar at 12:00 PM