Since I was going to be mentioning Flickr Video in my presentation about VideoCLEF at last week's TRECVid 2009 workshop, I decided I should try and make one. This video was shot out the window in the morning. And yes, I dutifully made sure it was properly geo-tagged as Gaithersburg. Sure indeed, capturing the ripple makes the flag image come alive..."It's like a photo, but it moves!" 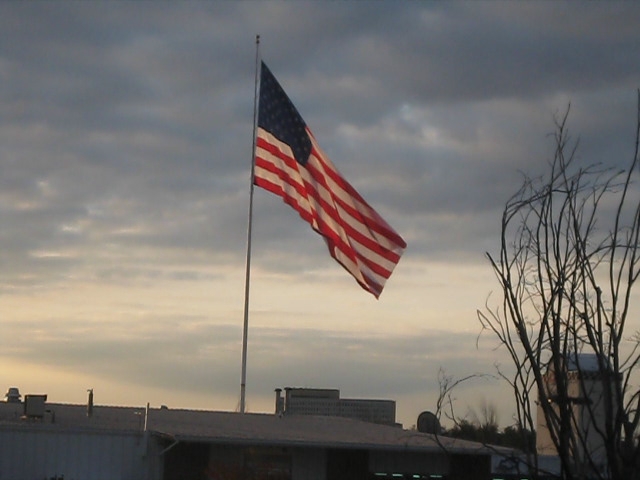 Maybe it's even a bit too alive. The ripples would be more dramatic had the camera been stabilized...you can see I'm not holding it still. Where does it end? Interactive moving pictures, a la Harry Potter's newspaper, I suppose.

Immediately after downloading this video off of my camera, I lost it. My first reaction: Had I downloaded all of the pictures on the camera? (Yes!) Only then did I start fretting about how much money I paid for the camera, a Cannon PowerShot SD1100, and how much it would cost to replace it.

I felt it viscerally: it's not just a bunch of bits! Content matters to us in a very personal way. Since I didn't empty the camera memory card, are my photos are floating around out there, in whatever space that the photos on lost cameras go. What if this space turns out to be the Internet? Would I be embarrassed?

In my opinion the most embarrassing picture on the camera is a lemon-face from Jay and Silent Bob. And yes, there is also a corresponding lion-face out there...somewhere. I have this most pressing information need: "Where is my camera?"
Posted by marlar at 2:22 PM