The MediaEval Workshop: What it's meant to be and why you want to be there. 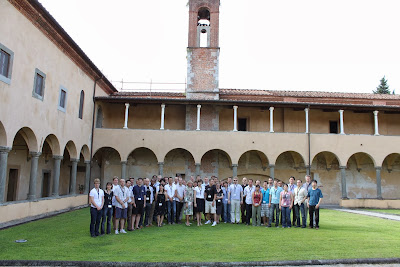 op is the event held each year in the fall at the culmination of the yearly benchmarking cycle. At the time of the MediaEval workshop many things have already happened in the benchmarking year: The task organizers have worked hard to define tasks and issue data sets. Participants have worked hard to develop algorithms that tackle the tasks, and they have run these algorithms on the data sets. The "runs" have been evaluated and each participating team has written their working notes paper. Now it's time for the workshop!

This blog post provides a view (from my perspective as one of the MediaEval co-ordinators) on the history of the workshop and on what the workshop is meant to be. In particular, it highlights the similarities and differences with other types of workshops.

The main goal of the MediaEval workshop is to bring everyone who carried MediaEval tasks together in one physical location to present and discuss their results, exchange experiences and develop ideas for how to improve their algorithms. The first year that we met at a medieval convent, Santa Croce in Fossabanda, it was mostly due to delight in the wordplay between medieval and MediaEval. However, we soon came to appreciate how getting everyone together working, eating and basically living in the same space creates an extremely productive focus on our our common tasks and goals. (Although unlike the nuns of the Middle Ages we don't go dashing off to prayer when we hear the convent bell.)

In 2010, we held the MediaEval workshop just before ACM Multimedia 2010, which was held at the Palazzo dei Congressi in Firenze, Italy. Santa Croce in Fossabanda is located in Pisa, about an hour's train ride from Firenze. We chose the dates and place to cut down on travel time and cost for people who wanted to attend both ACM Multimedia 2010 and the MediaEval 2010 workshop.

The next year, Interspeech 2011 came to the Palazzo dei Congressi in Firenze about the same time of year. MediaEval submitted a proposal and was granted the status of an "Official Satellite Event of Interspeech 2011". Now, instead of just taken advantage of the convenience for travel, we began emphasize hook-up to the topic of the conference: being associated with Interspeech reinforced the use of speech within MediaEval and helped us to better realize the goals expressed in the MediaEval slogan The "multi" in multimedia.

This year, the 12th European Conference on Computer Vision (ECCV 2012) will be held in Firenze. This conference provides us with the opportunity to reinforce the use of visual content within MediaEval, another of the multimedia "multi's". The MediaEval 2012 Workshop will be held right before this conference starts, again in Santa Croce in Fossabanda in Pisa. A very close contending idea for the MediaEval 2012 workshop was to hold it near 13th International Society for Music Information Retrieval Conference (ISMIR 2012) in Porto. However, the results of the MediaEval 2012 survey showed that the majority preferred to co-ordinate the date and place with ECCV 2012 and stay for a third year in Pisa.

In sum, the idea of being close to a large conference related to MediaEval topics has grown from being a convenience to being an aspect that strengthens and enriches both the benchmark and the workshop.

What exactly happens at the MediaEval workshop? The workshop consists of a series of sessions on the individual tasks. The task organizers present the task as a whole and each team presents its individual results, after which the floor is opened for discussion. More discussion and exchange occurs during meals and breaks in ad hoc groups. We try to build in a lot of space for discussion into the workshop schedule and especially try to create opportunities for students to discuss with more experienced researchers who help them to guide their efforts along the most effective path.

The proceedings are an important aspect of the workshop. The MediaEval workshop proceedings is a "Working Notes Proceedings" and consists of short (two page) papers written by the participating teams to report their results. These papers describe the algorithms that are used and present the results. They then also seek to understand the algorithm, and participants are requested to report: The working notes submissions are reviewed by the task organizers. The task organizers may either accept the submission as is, or may come back to the participant team with a request for revisions of the paper. The preferred mechanism is to have the papers revised rather than to reject them --- sometimes this revision cycle means that the working notes proceedings is not ready until just before the workshop. For this reason, the working notes proceedings is distributed at the workshop on a memory stick.

After the workshop, the working notes is made available online. The 2011 the "Working Notes Proceedings of the MediaEval 2011 Workshop" was published here: http://ceur-ws.org/Vol-807/ and in the future we would like to continue to use http://ceur-ws.org/. By publishing in this way, the copyright for the individual papers is with the papers' authors.

MediaEval working notes papers are intended to be first versions of work that is later extended by the authors and submitted to mainstream venues, such as conferences and journals. The fact that the MediaEval workshop proceedings consists of short working notes and that the copyright does stays with the authors keep the proceedings consistent with the goal of reporting an initial research result, which will then be refined and extended using input from the discussion at the MediaEval workshop.

Another important goal of the workshop is to discuss the tasks themselves. Did they help to move the state-of-the-art forward? Should we improve or replace them next year? Are their new questions that need to be answered that require new tasks. Any one attending the workshop is welcome to stand up in the final session and "pitch" an idea for a new task. Tasks which receive good community support in this session have a good chance of receiving the response levels they need on the yearly MediaEval survey to run as tasks in the next year.

Finally, the workshop also aims to connect ourselves and our research to the larger community. We welcome participants from industry who have tasks that they might want to pitch to the community. We also welcome representatives from other benchmarks: MediaEval grows stronger by staying in close contact with groups running benchmarking activities in areas beyond the MediaEval core domain of human and social multimedia. MediaEval 2011 was presented at CLEF 2011, NTCIR 2011 and FIRE 2011 and in 2012 we hope to convince some of our sister benchmarks to give a reciprocal presentation on their own experiences.

As part of staying connected to the larger community, the MediaEval 2011 workshop included a poster and demo session where projects that help to organize MediaEval tasks could present their results and where industry people could make a presentation of new and interesting problems that they would like to make known to the MediaEval community as possible benchmarking tasks.

The workshop closes with a gathering of task organizers and others who have invested time and effort into the community or want to get more closely involved in the future. During this session, we reflect back on what happened so far in the benchmarking year and also discuss the MediaEval related activities that we organize beyond the core benchmarking activities. These include joint papers among all the participants of a task and also special sessions at conferences. Looking forward we also plan to get involved in organizing more workshops (of the traditional variety) at conferences and also think about the possibilities of special issues. Finally, we reflect on our MediaEval goal, To offer the community innovative new tasks related to the human and social aspects of multimedia and our slogan The "multi" in multimedia (it not necessary to be able to say the slogan with a straight face.) On the basis of these reflections, we consider where we would like to go with the benchmark in the coming year.

So why do you want to be at the MediaEval workshop? Well, if you are a task participant, it gives you an opportunity to exchange with other people working on topics similar to yours and helps you to understand and improve the algorithms that you are using to approach your task. MediaEval needs a central group of dedicated researchers to organize the tasks that make the benchmark run. Attending the workshop is a good first step to getting more deeply involved in MediaEval, for example, by proposing a task for the year.

On the MediaEval 2012 survey, we had a question concerning what the community thinks about how MediaEval should grow. I personally, want to keep the workshop as small and intimate as possible. In 2011, we had nearly 60 people and that appeared to me to be a good maximum size for the workshop. However, when I examined the survey results, I realize that I am in the minority here, and that most of the people in the community would like growth. As a result, I am changing my opinion and we will not attempt to artificially restrict growth, as long as it is sustainable.

The issues and ideas around growth is just one area in which the concept of the MediaEval workshop is evolving. One of MediaEval's strengths is that it develops from year to year, guided by the input of the community --- and in particular those people who invest the most hours of their time to make it work. I look forward witnessing and being involved in this development in the 2012 season and, we hope, to seasons beyond.