The timeline of my relationship with Buzz was rather a short one:
Why did I opt out of Buzz? Well, (perhaps rather unsurprisingly) it's an issue that concerns search. Consulting the Buzz site provides me with the information that Buzz is, Meer dan alleen statusberichten: Updates, foto's, video's en meer delen. (Eng. "Not only status messages: Share updates, photos, videos and more"). Sharing stuff with my friends and family is nice, but what if I want to go back and find this stuff later? How will it be indexed? Will I be able to find it, but date, location, keyword, tag? Can they find it? Is there a mechanism for "forgetting"? (If I don't want the option of going back to re-live every Valentine's Day of my past, for example.) What will the cross-lingual search support be like? (The site has made a lucky guess that I speak Dutch, but my sharing will likely be in a mixture of languages...Will it cross languages to reach my followers?)

There's no readily available information on any of these issues. It's all about Buzz, with no vision of what's going to happen with the large amounts of previously Buzzed that will enevitably accumulate. I don't want to be tempted into Buzzing into what, without effective search and browinsing technology, basically is huge void. I'd better keep on simply printing out pictures and sending them to my family and friends with the conventional mail. Sure, I can Buzz it today, but a couple years from now my stuff will be simply gone. If it is indeed being archived somewhere, it will be gone in the sense of its useless without a intelligently conceived mechanism to search and browse it.

To accompany this post, I've chosen a photo from a Flikr that is dated 1909. If the woman in this photo had Buzzed this picture one hundred years ago, would it still be in the possession of her great-grandchild? Given the text on Flickr the great-grandchild is obviously fascinated by it and thrilled to have it. From the beginning, Buzz should have a vision that recognizes the value of stale Buzzed.
Posted by marlar at 4:42 PM

If ever a Buzz there wuzz

Google's precipitous plunge into the socially networking arena is basically beneficial for us Gmail users stuck in our old-fashioned email world. Powerful new forms of communication, work, socialization and entertainment are emerging as a result of platforms that are developed for the explicit purpose of connecting an individual to a network of other individuals. To learn to make the most of these new forms, we need to be able to pass seamlessly from our old models, based on metaphors like the letter (one-to-one) and the newspaper (one-to-everyone) to new models. These include, from to the new one-to-several and everyone-to-everyone models supported by Google Buzz.

Seamlessness is one thing, pre-weaving a friends network from a list of e-mail contacts is another. I find it hard to believe that Google launched Buzz in its initial form without anticipating the deluge of angry protests. In my opinion, relatively small scale user test would have allowed them to anticipate the overwhelmingly negative reception. Google's reaction, the adaptation of Buzz towards making concealing rather than revealing the default, has been remarkably fast -- are they really making it up as they go along?

It would not surprise me if Google realized in advance that they were stepping over an important line with the launch of Buzz. Whether it was meant in this way or not, it is worthwhile reflecting on the message the overstep relays. Google could have found no more effective way to remind the world that, although they invest in protection of our privacy and freedom of expression (cf. Gmail's quote to NYT), they cannot make a guarantee to Gmail users that Gmail is an entirely secure channel of communication. Effectively, in the face of threat from hackers traced to China, Google has reacted by engaging it its own sort of hacking. Because Buzz steps so far outside of what people general expect e-mail to do, Google has basically carried out a hacking attack on itself. Essentially, by momentarily making us feel exposed, by showing us the potential damage that could be wrought by a large-scale Gmail hacking attck, Google has given us a clear and memorable reminder: Gmail cannot, and never will be, able to guarantee 100% protection of our privacy. We must always keep in mind the potential dangers of large scale compromise of the system.
Posted by marlar at 2:17 PM 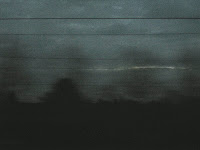 I am sitting in the train from Brussels to Rotterdam. I have work to do, but I am also too tired to do it well. I need to entertain myself instead. What to do? Hmm. Hey, write a blog entry. But I have the strangest problem. I don't have internet connectivity. I can't write. But I could write a post and upload it later.

I still have the same feeling: I just can't write.

Can't write? Well, first, I have my blog drafts stored on blogger.com. I currently have one half finished and I'd like to finish it off. But I can't get to my draft and if I could, I couldn't finish it, since I'd like to put in some links and check some data sources and facts...that requires connectivity. Slowly it strikes me: I carry an inner conviction that I can't write without access to a search engine. Is it true? I can't create without search? I'm moved to prove that this is not true.

We pass over the Hollands Diep by Dordrecht. Is that really what it's called? I've just always thought that this water here was what people were talking about when they say Hollands Diep.

Well, no way to look that up now. Instead I gaze out on it, the first few seconds wishing that I was making a video of the view from the bridge. It's the fading light. The sky and the water are nearly the same color and the struts of the bridge (hmm, shall I call them struts or girders--can't check that either...) pass by in regular intervals, with a comforting rhythm. I realize the bridge will be over, so I give my thought flow a little nudge towards simply enjoying the view and not wishing I were capturing it.

The conductor comes by and checks my ticket...ok that was another couple minutes.

Now were stopped in Dordrecht...here comes the coffee guy...in Dordrecht still...Hey, at least I can add a nice Dordrecht image to this entry.

The first several don't come out well. Then the station is gone, but there are trees. Rows of trees. That's iconic for the Netherlands, at least in my mind. Click, click, I capture a couple images. Trees and telephone lines. Whereby the telephone lines are strangely crisp against the blurry trees. Color looks interesting grey/blue. That's nice...I can fiddle with it more later.

I've listened to quite a few talks lately on classifying multimedia according to affect. These talks are mostly discussion the emotional impact that an image or a video has on the viewer as opposed to discussion of the affect being experienced by humans depicted in the image or video.

I look at my trees and telephone line shot again and wonder what the emotional impact on the viewer would be. I guess the color would be sadness: the Dutch word verdriet comes to my mind. Of course, I can't go and look up what the affect people say about this color. I think it's a cool color. I also remember one talk in which there was a slide that wanted to convince me that people consider this sort of color masculine.

I remember that slide exactly because it caused me a bit of mental distress. If I had a group of subjects doing user test and I asked them to arrange pictures on a masculine to feminine scale -- what exactly would they be doing? Accessing their emotional experience? Or, and I consider this more plausible, "cheating" by tapping into past baby congratulations card selection experience? Look around the train, where do we see blue? The button that closes the doors. Blue. The button that opens the doors. Yellow. The labels get removed or the malicious switch them, but the regular train riders know. It's convention and not emotion.

I think that when I will look at this picture the future, it will remind me of tiredness. Of how exhausted I was when I took it. Of my failure to capture the moment in the way I thought it should be captured. And how befuddled my brain was both by the tiredness and also by the attempt to write -- to develop a coherent point -- without access to search.

But here we are now. Rotterdam.
Posted by marlar at 9:00 PM